This past week has been a whirlwind of emotions. Sunday, we took Dad to the emergency room to try and get an answer on why he is unable to walk and use his hands. He spent nearly 5 days in the hospital, and during this time we found out that Dad has brain and spine metastases. He was discharged on Friday to a facility that specializes in physical therapy. His spirits seem to be good, mostly because he has had so much support since his hospital admission. This includes a visit from his brother who he has not seen or spoken to in 15 years. We were able to locate him, and he made the trip from Florida the following day. It proves that blood is thicker than water.

So much has happened in the past 2 months since his arrival from Florida. It’s impossible to believe that a man as good as my Dad would have to succumb to such torture.

As if the stage IV lung cancer wasn’t bad enough, we now have to accept that it has traveled to his brain and his spine, which will potentially shorten the already limited time we have left with him.

His oncologist says that he is not strong enough right now to continue with chemotherapy, and this is even harder to accept because it was actually working. After only 2 treatments, his tumors have shrunk, but now we have to worry about his brain metastases. They are planning on doing radiation, but only after he is discharged from the physical therapy facility.

I don’t even know what else to write other than I am growing more anxious by the day worrying about the unknown.

My last post mentioned how Dad was struggling to get up/down the stairs due to weakness in his legs. This condition has only worsened to the point where Dad was confined to the bedroom (with the exception of going to bathroom, but even this has become a struggle).

A few nights ago, Dad fell in his room. He was trying to get up and get to his walker so he could go to the bathroom on his own. His legs gave out, and he fell.

This morning was the first time Dad admitted he was scared. It broke my heart to see him so vulnerable.

Last night, Monday, December 3, 2018, Dad was admitted to the hospital. My sister and I took him in at around noon because of his severe weakness, uncontrollable pain, and he was even complaining of dizziness.

They did a scan, but still no MRI’s. I am hopeful that they will schedule MRI’s on his brain and spine because the ER doctor seems to believe that Dad’s cancer has now spread to his spine, which is something that I have been wondering for several weeks now.

Dad is confused to the extent that he thought the year was 2013. I thought this was odd because for the most part, he seems to understand things. He knows who everyone is and can still have conversations with people, but for some reason, he is confused about the year.

My sister and I left the hospital at around 8:30pm when our Uncle Jimmy arrived. He said that he would stay with Dad until they got him settled into a room. 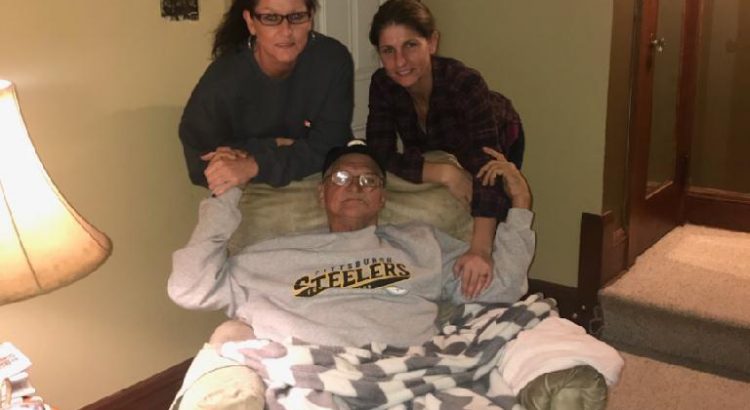 As if the reality of losing your Dad isn’t enough, we have to deal with all of the worries and heartache that go along with the dreadful disease of cancer.

We got through Thanksgiving, but unfortunately, Dad felt worse than he has felt all along on Thanksgiving Day. His ability to walk is declining every day, and today we made a trip to the Emergency Room.

My dad is very stubborn, which makes it a little more difficult to care for him when he is not accepting the reality of his situation. I cannot imagine how he feels, but on the other hand, it is time that we all get a grip on what is happening here.

I am going to try and get some help with a home health aide, and I am also going to schedule an appointment with Hospice, which was recommended by the ER physician.

They did not want to admit him to the hospital today unless it was absolutely necessary due to his white blood cell count being so low and the risk of infection.

Dad has his 3rd round of chemotherapy scheduled for December 6th, but I honestly don’t know if he can handle it. I am really hoping that his oncologist will discuss his treatment plan with him so that he can make a decision on what his best course of action should be to live a better life for the time he has left vs. how he has felt since he started his chemo treatment in October, which has been nothing short of dreadful.

Looking For a Specific Sympton or Appointment, Please Use this Search Bar

My name is Melissa (yep, that's Dad and I in the photo above in October 2016). I am Dad's youngest daughter, and I want to share our journey with others in the event that I can help at least one family who is battling the terrible disease of cancer.